Personal and collective Exhibitions have taken place around the world.

Throughout Mary de Piro's career, she has exhibited in:

and for various institutions including:

and most recently in 2016 a Retrospective Exhibition sponsored by the Bank of Valletta (BOV) held at their corporate headquarters in Santa Venera, Malta.

The retrospective was inaugurated by the President of Malta, Her Excellency Marie-Louise Coleiro Preca. The Chairman of the Bank of Valletta, John Cassar White, welcomed everyone to the Exhibition. There followed speeches by Professor Richard England, a friend and patron, and finally by Dr Theresa Vella who was the Curator of the Exhibition. 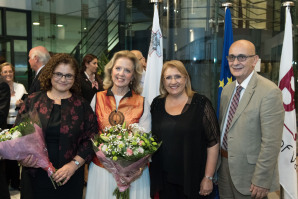 Mary donated a picture for auction at the highly succesful Valletta Skyline Ball at Palazzo Parisio in 2018.

She recently donated a picture for auction in aid of Din l'art Helwa.